To strengthen the historic and necessary bonds of friendship between France and the United States of America through significant educational projects that will deepen our commitments to student understanding of our Freedom and Democracy and Ethical Leadership.

With instant communications through media and the internet and easy and accessible worldwide travel, we think it important to make young people aware, all of us aware, that whether we like it or not…. We are all Ambassadors and Diplomats.  We must embrace this responsibility by choosing to be, and educating ourselves to be; Good Ambassadors and Good diplomats. What each of us does; matters.

To pass down the lessons of our Locust Valley and Oyster Bay, Long Island WWII History with Normandy, (which, in 1947 founded the concept of Sister Cities with Sainte Mere Eglise); to the next generations so they will understand the costs of our Freedom and Democracy and the imperative to be vigilant in defense of our Western Civilization and to honor our Veterans in our vow to NEVER FORGET. 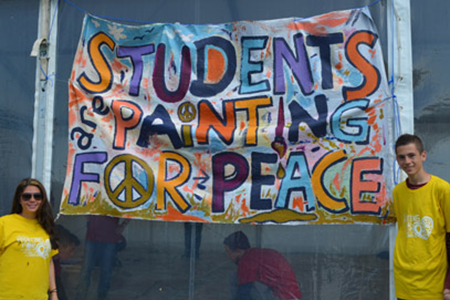 Operation Democracy was approached by Mayor Jean Quetier of Sainte Mere Eglise and Susan Eisenhower; to spearhead a campaign to permanently install (during D-Day 2021 and 2022) two major bronze sculptures in prominent places in the middle of the village.

In reciprocity for France’s gift to the United States of the Statue of Liberty, we are honored to join with the National American Legion and their recent “RESOLUTION #15” to gather support and participation from all 13,000 American Legion Posts across America to raise funds to have the renowned sculptor Pablo Eduardo create monuments to our hometown hero and the Founder of the American Legion, Teddy Roosevelt, Jr. and to the courageous architect and leader of “Operation Overlord”, our General and President Eisenhower.

Bronze and copper from the original Statue of Liberty gleaned from its restoration and preserved by Rick Stocks will be used.

We encourage all DONATIONS!!

Miniature of the sculptures will soon be available.

PLAN A TRIP TO NORMANDY DURING D-DAY WEEK!

A 15 minute Documentary Short Film “SIXTH OF JUNE” Produced by Rylan Soref and Directed by Henry Roosevelt that was initiated by Operation Democracy and supported by the David Knott Family Foundation; recently won the Santa Barbara Film Festival in its category.

The full documentary “Mother of Normandy”, which describes this beautiful history is available for purchase

We have many plans to continue utilizing the powerful film and media platforms to accomplish our mission statements.

Initiated by our President, Kaye Weninger in 2014, Operation Democracy supports an annual program at Locust Valley High School during graduation week where our local American Legion Post and our Veterans fold American flags and present them to each graduating senior, accompanied by inspirational keynote speakers from our military.  We are hoping to soon launch this pilot program nationally in partnership with the National American Legion Posts across America.

The goal is for every American High School graduate to receive an American flag and to understand its meaning.

Through a variety of programs Operation Democracy has supported theatrical and other events and exchanges between students and faculty from schools in Locust Valley and Sainte Mere Eglise to celebrate and deepen the relationship forged by our being founding Sister Cities and to maximize the potential for future educational opportunities.

Future projects will focus on:

Leadership, War and Peace, Freedom and Democracy, the Holocaust, Eugenics and ETHICS for the ongoing cultivation of Ethical Leadership.

Each D-Day week, Operation Democracy hosts a “tent on the square” of Sainte Mere Eglise to house new artwork by students from Locust Valley and Sainte Mere Eglise who have been asked to manifest their vision of freedom, democracy and peace. Our President, Kaye Weninger has initiated this and staffs the tent to disseminate information about Operation Democracy in support and in honor of our Veterans.